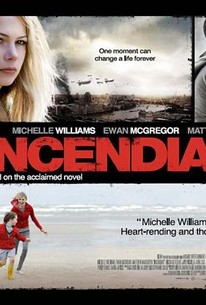 A solid performance from Michelle Williams isn't enough to save this well meaning, but disappointing, cliché ridden drama.

A woman wrestles with grief, betrayal and redemption in this psychological drama from director Sharon Maguire. One afternoon, a young woman (Michelle Williams) sends her husband and young son off to see a football game, and while they're gone for the afternoon she enjoys a tryst with her lover (Ewan McGregor), an opportunistic reporter. While the woman is making love to another man, she hears a news report that a suicide bomber made their way into the stadium, and that hundreds of people are dead. The woman is horrified to learn that her husband and child were among the victims, and as she struggles to sort out the pieces of her life, she begins having second thoughts about her illicit relationship while struggling with her feelings about Terrence Butcher (Matthew Macfadyen), a police officer looking into the attack. As the woman tries to come to terms with her grief, she befriends a young boy (Usman Khokhar) whose father happened to be involved in the attacks. Adapted from the acclaimed novel by Chris Cleave, Incendiary received its world premiere at the 2008 Sundance Film Festival. ~ Mark Deming, Rovi

Sidney Johnston
as The Boy

Usman Khokhar
as The Bomber's Son

Sasha Behar
as The Bomber's Wife

Nicholas Courtney
as Archbishop of Canterbury
View All