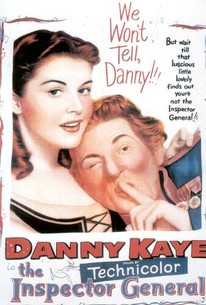 The satirical bite of Gogol's play +The Government Inspector is dispensed with in favor of traditional Danny Kaye buffoonery in The Inspector General. Kaye plays the illiterate stooge of two-bit medicine-show- entrepreneur Walter Slezak. Abandoned by Slezak, the starving Kaye wanders into a corruption-ridden Russian village, which is all geared up for a visit from the Inspector General. Mistaking Kaye for that selfsame royal inspector, the townsfolk fawn on the confused Kaye, granting him his every whim and plying him with all sorts of bribes. In the original Gogol play, the boorish phony inspector takes advantage of the villagers' error by laying waste to the town and seducing a few local maidens; in the film, Kaye is as pure as the driven borscht, as is his true love (Barbara Bates), the only honest person in town. The treachery is in the hands of Slezak, who fakes Kaye's death and tries to blackmail the crooked local officials. The deus-ex-machina arrival of the real Inspector General foils the crooks and places the nonplused Kaye in the job of town mayor. Those of you who read the play in college may remember it ends with everyone frozen in horror when the genuine inspector shows up, with Gogol's stage directions insisting that the actors hold their fearful poses for a full sixty seconds. Be assured that in the film version of Inspector General, nothing stands still--least of all Danny Kaye, who cuts quite a swath through several Sylvia Fine/Johnny Mercer specialty songs.

Gene Lockhart
as The Mayor

Nestor Paiva
as Gregor
View All

Critic Reviews for The Inspector General

Audience Reviews for The Inspector General