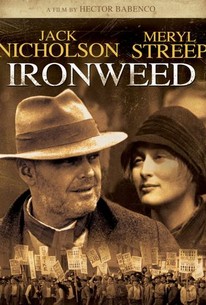 Jack Nicholson and Meryl Streep play masterfully off each, but Ironweed's unrelenting bleakness proves to be more monotonous than compelling.

Based on the William Kennedy novel of the same name Ironweed is set in the waning years of the Depression. Jack Nicholson plays Francis Phelan, a washed-up ballplayer (a onetime infielder for the Washington Senators) who deserted his family back in the 1910s when he accidentally killed his infant son by dropping him. Since that time, Phelan has been a shabby barfly, living from drink to drink; he spends his days palling around with Rudy (Tom Waits), with whom he works a motley series of jobs in exchange for a place to lay his head and an occasional jug of wine. Wandering into his hometown of Albany, New York, Phelan blearily seeks out his girlfriend and erstwhile drinking companion of nine years, Helen Archer (Meryl Streep), who has begun prostituting herself for drink and lodging. The two derelicts touch base in a mission managed by minister James Gammon, and later in Fred Gwynne's squalid gin mill. Over the next few days, Phelan takes a few minor jobs to support his habit, while his mind wavers between past and present. Eventually, a chance for a reconciliation with his wife (Carroll Baker) emerges. Directed by Hector Babenco following his enormous success with Kiss of the Spider Woman , Ironweed netted Oscar nominations for Nicholson and Streep.

Will Zahrn
as Rowdy Dick

Jordan Valdina
as Youth at Strike

Pat Devane
as Nurse
View All