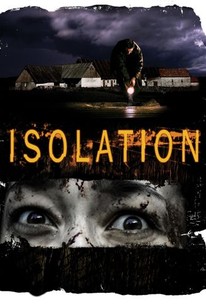 An experiment in bovine genetic modification goes horrifically wrong in writer/director Billy O'Brien's debut feature, Isolation. John Lynch stars as Dan a cattle farmer on the remote Irish countryside, whose ex, Orla (Essie Davis of the Matrix films), a veterinarian, has convinced him to take part in a profit-driven experiment on his cows, run by John (Marcel Iures), an officious scientist who seems very concerned with maintaining secrecy. Orla is conducting a routine check on a pregnant cow, and her hand is inside the animal, checking the unborn calf, when something bites at her. John is called to the farm, and reassures them that the safety checks were all okay. He's more concerned with the presence of a caravan just outside the farm. The caravan is occupied by Jamie (Sean Harris of 24 Hour Party People) and Mary (Ruth Negga of Breakfast on Pluto), a desperate young couple who are apparently hiding out from something. That night, after Orla and John have left, Dan hears his cow wailing. Dan's phone is out, so he reluctantly turns to Jamie for help. After a protracted and painful delivery, Orla turns up, and decides to "shut it all down." She kills the mother and the calf. Examining the calf, she realizes that it was born pregnant, and the "severely malformed" fetuses have distinctly un-cowlike exoskeletons. Unfortunately for all involved, one of the offspring survives, and when John finally shows up, he suggests that the farm be quarantined, as there may be a danger of "infection." Isolation was shown by the Film Society of Lincoln Center as part of the 2006 Film Comment Selects series.

Ruth Negga
as Mary
View All