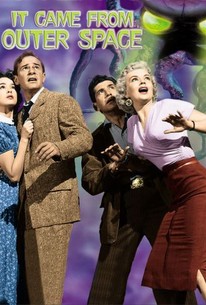 It Came from Outer Space

It Came From Outer Space is a pulpy-but-effective psychological sci-fi picture, with a provocative message about xenophobia.

It Came From Outer Space is one of a handful of science fiction films from the 1950s that plays as well today as it did on its original release, this despite the fact that its original 3-D elements seem to be lost. It was also the first science fiction effort of director Jack Arnold, and one of three excellent 3-D features that he made (the others were Creature From the Black Lagoon and Revenge of the Creature) during that format's short-lived history. It was also, along with The Incredible Shrinking Man, one of the two most sophisticated films he ever made in that genre. Additionally, it was Arnold's first opportunity to use the desert setting that seemed to inspire him in some of his best subsequent movies. Based on a story by Ray Bradbury, the movie starts off in a gentle, lyrical mode, almost reminiscent of +Our Town, as the narrator introduces the tiny Arizona town where the action will take place. Writer John Putnam (Richard Carlson), a new arrival to the town and an amateur astronomer, is looking at the skies with his fiancée, schoolteacher Ellen Fields (Barbara Rush), when they see what looks like a huge meteor crash into the desert. Putnam and Ellen go to the site of the crash and find a huge crater. When he goes down inside, Putnam sees what is very obviously some kind of vehicle or device embedded in the ground, but before he can show it to anyone, a rock slide buries what he saw. He reports that a spacecraft of some kind is buried there and is duly ridiculed by the local press and some of his own colleagues in the astronomical community, and even Ellen has her doubts. The local sheriff, Matt Warren (Charles Drake), is downright hostile because he believes that Putnam is not only an interloper, but has also taken Ellen away from him. Putnam is at a loss as to what to do, and doing something -- or, perhaps, not doing anything -- becomes a critical matter when various townspeople start to disappear, including Ellen, to be replaced by alien "duplicates." A small but significant part of this action is told from the standpoint of the aliens, who are only glimpsed in brief flashes as they move through the desert and the underground caves where they are hiding. Putnam ultimately comes to understand that the aliens are actually benign and only need time to repair their ship and leave; but by then, the sheriff and the rest of the town have started taking his original warning seriously and their intervention threatens the lives of everyone. Reason and a peaceful approach prevail, but only just barely, and the space travelers are allowed to go on their way -- in return, they restore the real townspeople. The movie ends on a hopeful note as Putnam predicts that someday, when we're ready here on Earth, the visitors will be back to make formal, peaceful introductions.

Critic Reviews for It Came from Outer Space

Audience Reviews for It Came from Outer Space

It Came from Outer Space Quotes