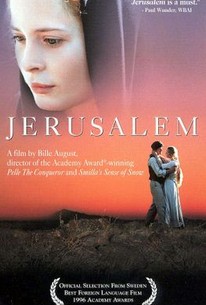 A group of messianic pilgrims abandon their native Sweden and emigrate to Palestine. This fact-based episodic Swedish drama looks at the events leading up to the trek and the immigrants' experiences after they arrive in the holy land. The story begins in Sweden and is introduced by the death of Big Ingmar, the leader of a small farming community. Shortly thereafter, his eldest daughter Karin sends Ingmar's namesake son to be raised by another family so she can control the family farm. Years pass and Ingmar grows up to fall in love with his beauteous "step-sister" Gertrud. But the romance never fully blooms, for Ingmar must leave to earn the money he needs to buy his father's farm back from Karin. About this time, the local village is plagued by a series of ominous disasters that begin with Karin's sudden paralysis. In the midst of the ensuing superstition and chaos, a charismatic, hellfire-and-brimstone preacher shows up, and some family members begin converting to his cause. Karin becomes a true follower when the preacher prays and she is "miraculously" healed. Ingmar eventually returns to find a very different village. With not enough money to buy the farm, he marries a wealthy young woman. Broken-hearted Gertrud immediately joins the preacher's cult and decides to follow him to Palestine to await Christ's Second Coming. Three months after she leaves, a recently divorced Ingmar arrives in Palestine to try to win her back. That is but one story line among many that transpire as the pilgrims struggle with survival in their strange new homeland. ~ Sandra Brennan, Rovi

There are no featured audience reviews for Jerusalem at this time.