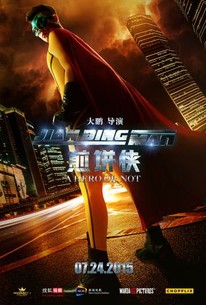 Beijing, the present day. Popular TV personality Da Peng (Da Peng) is invited by gangster businessman Wang Hai (Liang Chao) to make a film in which he will invest. Wang insists that Da Peng's co-star is TV drama actress Du Xiaoxiao (Yuan Shanshan). However, after a nightclub scandal involving Da Peng goes viral, he's blackballed by a powerful internet executive (Charles Zhang) and finds himself unable to attract any male co-star. Wang also wants his investment back. Da Peng decides to make his own movie on the cheap, using a script he has about an alien, A Li, who arrives on Earth and has various adventures as a superhero. A paparazzo, Hu Lai, joins the production group, as well as an aspiring actor, Ma Tao (Yi Yunhe), and Da Peng persuades Xiaoxiao to play Xiao Yi, the owner of a jianbing (pan crepe) stall who becomes brainwashed by the alien (played by Da Peng himself) and is transformed into his sidekick, super heroine Red Rose. In order to film some star names on the cheap, Da Peng and his team hijack Hong Kong actress Sandra Ng when she's jogging outside her hotel and try to stage a rape-and-rescue scene around her. When that fails, they try the same thing with another Hong King film-maker, Eric Tsang. After trying to get more free help from veteran Beijing Film Studio actor Wei Yunxiang, fight choreographer Yue Yunpeng and actress Liu Yan, Da Peng finally runs out of money and starts working as a host at funerals. His career looks at a dead end. (C) Asia Releasing

There are no featured audience reviews for Jian Bing Man at this time.