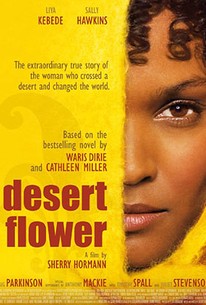 A woman who achieves stardom against all odds uses her celebrity to make a difference in the land she left behind in this drama based on a true story. Waris Dirie (Liya Kebede) was born in Somalia, where she was one of a dozen children raised by a family of travelers. Waris grew up poor, and at the age of five, like many girls in East Africa, she was the victim of genital mutilation, a practice performed by Muslims in the belief it will insure that the girls will remain "true virgins." At 13, Waris' family sold her to an elderly man, but rather than live under his tyranny, she ran away and eventually settled in London. After a series of odd jobs, Waris was attending school and working at a hamburger stand in her spare time when she was spotted by Terry Donaldson (Timothy Spall), a professional photographer. Terry was convinced that Waris had the looks and poise to be a model, and with the help of Lucinda (Juliet Stevenson), an agent, Waris begins making a name for herself in fashion modeling. But as she becomes an international success in the glamorous world of high fashion, Waris can't escape the cruel irony that while she's known for her sex appeal, the mutilation from her youth prevents her from fully enjoying lovemaking, and she uses her rising fame to speak out against the barbaric practice still forced upon many young girls in the Third World. Desert Flower was an official selection at the 2009 Venice International Film Festival, where it was screened as part of the "Venice Days" program.