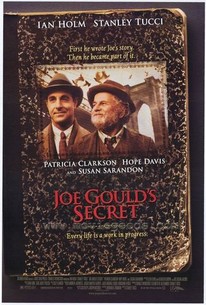 This historical comedy-drama is based on the true story of Joe Gould, a bohemian eccentric who was a fixture in New York's Greenwich Village from his arrival in 1916 to his death in 1964. Gould, who claimed to be a graduate of Harvard, would cadge drinks and subsist on catsup as he regaled patrons of neighborhood saloons with stories, poems, opinions, and his imitation of a seagull. In a 1942 New Yorker profile by journalist Joseph Mitchell, Gould spoke of his life's work, a book entitled An Oral History of Our Times, which he claimed would be eleven times longer than the Bible, contain a variety of overheard conversations from throughout the years, and document the decline of 20th century culture. Mitchell kept tabs on Gould, and tried to introduce him to publishers who might put his work into print, but nothing ever came of it, and it wasn't until Gould's death that Mitchell discovered the surprising truth about his friend. Directed by Stanley Tucci, Joe Gould's Secret stars Tucci as Mitchell and Ian Holm as Gould; Hope Davis, Steve Martin, Susan Sarandon, and Patricia Clarkson highlight the supporting cast.

Jack A. O'Connell
as Chef

Nell Campbell
as Tamar, the Hostess

Mark Cassella
as Cop At The Building Site

Ted Blumberg
as Phil, the Writer

Leigh Carlson
as Janet
View All