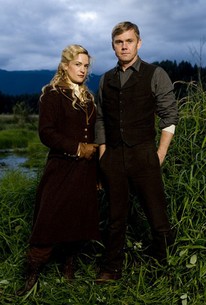 Journey to the Center of the Earth

Journey to the Center of the Earth Ratings & Reviews Explanation

Journey to the Center of the Earth Photos

Not to be confused with Journey to the Center of the Earth 3D, the Brendan Fraser adventure that was released into theaters the same year, this made-for-cable take on Jules Verne's classic tale stars Golden Globe winner Rick Schroder as the leader of a treacherous mission miles below the Earth's surface. Famed anthropologist Jonathan Brock (Schroder) has just accepted the most dangerous -- and exciting -- assignment of his entire career. Four years ago, Edward Dennison (Peter Fonda) -- husband of wealthy Martha Dennison (Victoria Pratt) -- mysteriously vanished while embarking on an expedition to the planet's core. Martha has never gotten over her husband's disappearance, and she's willing to pay Jonathan whatever it takes to locate the missing Edward. Now, in order to retrace Edward's footsteps and find the answer to Martha's biggest question, Jonathan enlists the aid of his nephew Abel (Steve Grayhm) and Edward's former partner Sergei (Mike Dopud) and sets off to Alaska in hopes of locating the secret gateway to the center of the Earth. With Martha in tow, Jonathan, Abel, and Sergei make their way into the great unknown and discover something truly spectacular. Miles beneath the Earth's surface is a world teeming with undiscovered life, a place where prehistoric birds soar overhead and man-eating megalodons rule the underworld oceans. The most surprising discovery of all, however, is a primitive race of warriors who have never seen the sun. Edward has become the leader of these men, the God-like ruler of a secret kingdom. But while Edward is indeed considered a god among the people, there is a devil in this world as well. As a rival tribe prepares to launch an attack that could destroy all of civilization, Jonathan and the rest of his crew stage the most daring escape ever attempted.

Richard Side
as Smith

Elyse Levesque
as Emily
View All

Critic Reviews for Journey to the Center of the Earth

There are no critic reviews yet for Journey to the Center of the Earth. Keep checking Rotten Tomatoes for updates!

Audience Reviews for Journey to the Center of the Earth

Journey to the Center of the Earth Quotes