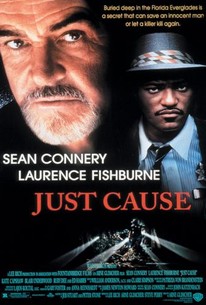 Just Cause you round up a phenomenal cast, that doesn't mean you have everything you need for a solid legal thriller -- and this film is forgettable proof.

The novel by John Katzenbach becomes this legal thriller starring Sean Connery as Harvard Law School professor Paul Armstrong. A legal expert whose days of trying cases are long behind him, Armstrong is moved by a plea he receives from a Florida death row inmate, Bobby Earl (Blair Underwood). It seems that the educated, upstanding Earl has been railroaded by an overeager sheriff (Laurence Fishburne) zealously trying to solve the kidnapping and murder of a little girl. Once Armstrong arrives in Florida, he is able to locate the murder weapon and cast doubt on Earl's innocence, even identifying a much more likely culprit in the homicidal genius Blair Sullivan (Ed Harris). All is not as it seems in the case of Bobby Earl, however, and Armstrong is going to end up regretting his interest in the case. Ruby Dee, Kate Capshaw, and Ned Beatty costar in this film from producer-turned-director Arne Glimcher. ~ Karl Williams, Rovi

Satcie A. Zinn
as Reporter
View All

Critic Reviews for Just Cause

Audience Reviews for Just Cause