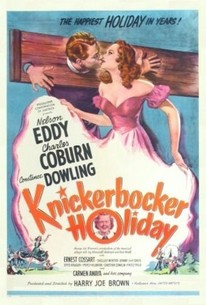 This is the film version of Kurt Weill and Maxwell Anderson's musical tribute to the history of New York City. The lavish tale begins in the mid 17th century when the Big Apple was known as New Amsterdam on the day that Peter Stuyvesant arrives from Holland to take over as governor. He is a notoriously stern man and his first edict is to celebrate by hanging someone. The corrupt town fathers nominate the troublesome Brom Broeck for the dubious honor because they are tired of his relentless crusades against them. Unfortunately, they cannot come up with justification for their choice leaving Broeck free to continue writing fiery editorials abut the cruelty of the new governor. When not writing, Broeck woos the lovely Tina Teinhoven while his best friend hangs out with her even more beautiful sister Ulda. Eventually the defiant Broeck's writing lands him in jail and while he languishes there, Stuyvesant begins moving in on Tina. To get Broeck out of the way, he banishes the publisher into the wilds. There Broeck begins organizing a settlers' revolt. Back in the city, Stuyvesant prepares to make himself very rich by jilting his people. Fortunately, it is his enemy Broeck who appeals to Stuyvesant's vanity and convinces him that it is better to be honest and go down in history as a hero. Stuyvesant listens and even helps Tina and Broeck reunite in the upbeat end. "September Song" is the most memorable tune from both the play and the film.

Percy Kilbride
as Schermerhorn the Jailer

There are no critic reviews yet for Knickerbocker Holiday. Keep checking Rotten Tomatoes for updates!

There are no featured audience reviews for Knickerbocker Holiday at this time.