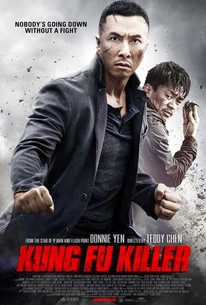 A vicious killer, Feng, is going round Hong Kong killing top martial arts exponents, leaving a secret weapon called the Moonshadow as his calling card. When convicted killer and kung fu expert, Xia, hears of this, he offers to help the police catch the killer, in return for his freedom. Despite their misgivings, the police release the former police martial arts instructor into their custody. With his help, they realize from the chronological order of the victims that the killer is targeting his victims, all the top masters in their martial arts style, following a martial code of training. When Xia also disappears after a close encounter with Feng, they suspect the worse: that the two are accomplices and Feng was the bait to help spring Xia from jail. But Xia has actually gone back to his home in Foshan to find out more about the mysterious calling card. While doing so, he discovers the killer's identity and his motivation: the true philosophy behind martial arts was to kill opponents who were weaker than him. Steadfastly, Xia refuses to be drawn into a fight with Feng - until the killer threatens the women he loves most. Only then does he realize that he would have to go against the martial code in order to uphold it.

New on Netflix: Gotham, How to Get Away with Murder, And More Streaming Options
New on DVD & Blu-Ray: What We Do in the Shadows, Tangerines, and More
Now Streaming: The Water Diviner, The Terminator, Rocky I-V, and More
View All