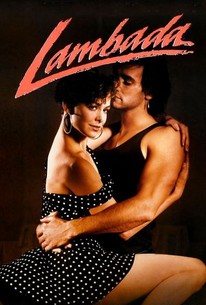 One of several films released to trade on the short-lived Lambada craze (it was an especially sexy Latin dance, in case you don't remember), Lambada stars J. Eddie Peck as Kevin Laird, a mathematics teacher at an exclusive Beverly Hills high school who by night puts away his slide rule and shuffles down to the barrio where, as Blade, he frequents a disco called No Man's Land and cuts loose, instructing the thermal-heated females on how to dance the lambada. After the bumping and grinding, he takes the ladies to a back room where he helps them get their GEDs. It appears that all is well with Kevin; he is appointed head of the mathematics department by principal Singleton (Keene Curtis) and his family never questions why he goes out at night dressed in leather and earrings. But then one of his students, Sandy (Melora Hardin), spots Kevin's gyrating pelvis when she heads to No Man's Land after an argument with her boyfriend Dean (Ricky Paull Goldin). Sandy begins to frequent the club and it is not long before Kevin's double-life is revealed. Dean comes to the club to take Sandy back and a disgruntled member of Kevin's barrio entourage, Ramone (Shabba-Doo), tells Dean the truth about Kevin. The result is a rumble between the posh high school kids and the barrio dropouts. Kevin is promptly fired, but a petition by Sandy reinstates him as the two opposing groups of kids square off in a math competition.

Rita Bland
as Lesley
View All