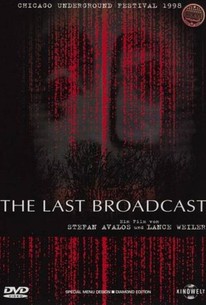 An absorbing, low budget thriller similar to Errol Morris' documentary The Thin Blue Line, The Last Broadcast was dubbed the first "desktop feature film" -- having been shot on inexpensive digital cameras and edited using home computers for the bewilderingly low price of $900. The effort landed filmmakers Steven Avalos and Lance Weiler in a November 1997 Wired Magazine cover story, where they were placed among the 25 people most likely to revolutionize the entertainment industry. Though constructed like an investigative documentary, The Last Broadcast is an assemblage of fictional yet realistically staged interviews, found video sequences, and contemplative voice-overs by the film's "director" David Leigh (David Beard), who claims to be making the film as a means of investigating the brutal murders of Steven Avkast (Steven Avalos) and Locus Wheeler (Lance Weiler), hosts of the small-town public access cable show "Truth or Fiction?". Leigh creates a complex and horrific story out of the show's final episodes, detailing Avkast and Wheeler's half-baked plan to multicast a special episode of "Truth or Fiction?" live on cable TV and the Internet. Prompted to investigate the legendary "Jersey Devil" by an anonymous fan, Avkast and Wheeler setup camp in the New Jersey Pine Barrens, recruiting local sound engineer Rein Clackin (Rein Clabbers) and "psychic" Jim Suerd (Jim Seward) for the event. Only Suerd makes it out of the woods alive, making him the prime suspect for a police investigation into the murders. When the "Truth or Fiction?" tapes (or what is left of them) are viewed by the police, Suerd's undeniably violent temper and unstable personality lead to his conviction for the murders. Leigh's film investigation, however, points in a different direction. As damaged video tapes of "The Last Broadcast" are painstakingly restored, the story of what really happened that night in the Pine Barrens begins to emerge. The Last Broadcast does a lot with its very modest budget, and is part of a growing lineage of successful "found footage" horrors which includes Cannibal Holocaust (1979) and The Blair Witch Project (1999).

Clair Deforest
as Editor for the Prosecution

Chadd Ritenbaugh
as Man with Guitar
View All

Critic Reviews for The Last Broadcast

Audience Reviews for The Last Broadcast