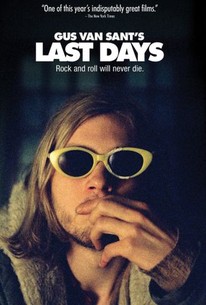 While the minimalist style is not for all viewers, those who prefer experimentalism will find Last Days hypnotic.

Introspective artist Blake is buckling under the weight of fame, professional obligations and a mounting feeling of isolation. Dwarfed by towering trees, Blake slowly makes his way through dense woods. He scrambles down an embankment to a fresh spring and undresses for a short swim. The next morning he returns to his house, an elegant, if neglected, stone mansion. Many people are looking for Blake -- his friends, his managers and record label, even a private detective -- but he does not want to be found. In the haze of his final hours, Blake will spend most his time by himself. He avoids the people who are living in his house, who approach him only when they want something, be it money or help with a song. He hides from one concerned friend and turns away another. He visits politely with a stranger from the Yellow Pages sales department, and he ducks into an underground rock club. He wanders through the woods and he plays a new song, one last rock and roll blowout. Finally, alone in the greenhouse, Blake will look and listen -- and seek release.

Harmony Korine
as Guy In Club

The Hermitt
as Band In Club

Adam Friberg
as Elder Friberg No. 1

Andy Friberg
as Elder Friberg No. 2