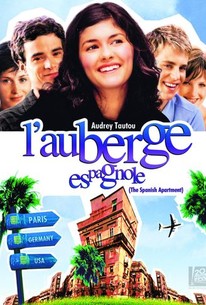 This multicultural comedy captures the chaos and excitement of being young.

A man eager to learn Spanish gets an education he wasn't expecting in this comedy drama. Xavier (Romain Duris) is a French economics student who is nearing the completion of his degree and is looking for work. Xavier's father arranges for him to meet a ranking member of the Ministry of Finance, who makes him an offer -- he can give him a good job, but only under the condition that he learn to speak Spanish. Determined not to pass up the opportunity, Xavier enrolls in a language program in Barcelona, despite the misgivings of his girlfriend, Martine (Audrey Tautou). Upon his arrival, Xavier moves into a large house shared by a large group of students from all over Europe. Xavier finds that his ideas and attitudes are challenged in a positive way by the diverse personalities of his housemates, and that his loyalty to Martine is tested by his attraction to Anne-Sophie (Judith Godrèche), a sweet but lonesome woman from France who has been away from her husband for too long. After a visit, most of Xavier's roommates decide they don't much care for Martine and Xavier gets advice on seducing Anne-Sophie from an unexpected source -- Isabelle (Cécile de France), a footloose lesbian living in the house. L'Auberge Espagnole received its world premier at the 2002 Cannes Film Festival, and went on to earn prizes at the 2002 Karlovy Vary International Film Festival, the 2003 Lumière Awards, and the 2003 César Awards.