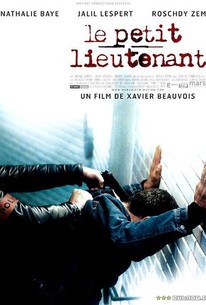 A young, inexperienced detective is inducted into an elite Paris plainclothes unit in Le Petit Lieutenant, directed by Xavier Beauvois (Don't Forget You're Going to Die). Antoine (Jalil Lespert or Human Resources) is as gung-ho as they come, and eager to learn everything he needs to know to be a good cop, although he misses his wife (Bérangère Allaux), a schoolteacher who stayed behind in the country when Antoine took his new job. Antoine socializes with his new comrades, who seem to drink an awful lot, with the exception of the unit commander, Caroline (Nathalie Baye), an alcoholic who has just returned from a long stint on desk duty. The other experienced detectives that Antoine looks up to are the cynical Louis (Antoine Chappey), and the stalwart Solo (Roschdy Zem), who in addition to the rigors of the job faces bigotry due to his Moroccan origin. When a Polish immigrant is found murdered in a canal near the station, the unit begins a methodical investigation, eventually learning that the victim was last seen with a couple of Russians. When a second victim is rescued from the waters of the canal a few days later, the case takes on a new urgency. As Antoine tries to fit in and learn on the job, Caroline struggles with her addiction and forms an almost maternal bond with the rookie. Le Petit Lieutenant also features Jacques Perrin, and was shown by the Film Society of Lincoln Center as part of their 2006 Rendez-Vous with French Cinema. ~ Josh Ralske, Rovi