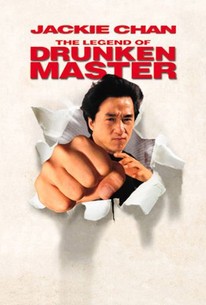 Jackie Chan sends up some amazing and entertaining fight sequences in The Legend of Drunken Master.

Jackie Chan returns in one of his greatest roles in this action-comedy sequel to his 1978 Hong Kong blockbuster Drunken Master. Wong Fei Hong (Chan) is a young master of the martial art of "drunken boxing," in which fighters use alcohol to blind themselves to pain and release the angry brawler within; with the right amount of drinks under his belt, Hong can become a furious one-man army. Hong accompanies his father (Ti Lung) on a voyage to China, where they purchase a precious supply of ginseng. When Hong discovers thugs stealing from their luggage, he leaps into action to get their belongings back. Instead, he winds up with a box of valuable Chinese artifacts, which criminals are hoping to smuggle to England at a tremendous profit. Hong sets out to fight the gangsters and give the artifacts back to their rightful owners, but while his stepmother (Anita Mui) encourages him to use his drunken boxing skills, his father feels his boozy antics bring shame to the family. Jackie Chan brought some of his most elaborate stunt work to Drunken Master 2, including a remarkable fight on a bed of hot coals; Chan also directed part of the film, after Lau Kar Leung was fired after a number of disagreements with his star. Six years after it became a box office hit in Asia, Drunken Master 2 earned a theatrical release in the United States; the film was re-titled Legend Of The Drunken Master (in part because the original Drunken Master never had a proper theatrical release in America), re-edited, and dubbed into English, with a new score by Michael Wandmacher. ~ Mark Deming, Rovi