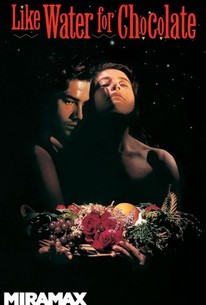 Like Water for Chocolate plays to the senses with a richly rewarding romance that indulges in magical realism to intoxicating effect.

Based on the best-selling novel by Laura Esquival, this internationally popular romantic fable from Mexico centers on a young woman who discovers that her cooking has magical effects. The tale's heroine, Tita, is the youngest of three daughters in a traditional Mexican family. Bound by tradition to remain unmarried while caring for her aging mother, Tita nevertheless falls in love with a handsome young man named Pedro. Pedro returns her affection, but he cannot overcome her family's disapproval, and he instead marries Tita's elder sister. The lovestruck young woman is brutally disappointed, and her sadness has such force that it infects her cooking: all who eat it her feel her heartbreak with the same intensity. This newly discovered power continues to manifest itself after the wedding, as Tita and Pedro, overcome by their denied love, embark on a secret affair. Director Alfonso Arau, Esquival's husband at the time, presents the acts of love and cooking with the same glossy, sensual sheen. Indeed, despite occasional digressions into a magical realist tone, the film often takes on the gloss of Hollywood romance. This combination of traditional melodrama and exotic fairy tale proved extremely popular with audiences, particularly in the United States, where it became one of the highest grossing foreign language films at the time. ~ Judd Blaise, Rovi

50 Movies & TV Shows to Netflix and Chill with This Valentine’s Day
All 42 Fresh Movies and Originals Coming to Netflix in January
Critical Consensus: Woo-Hoo! Simpsons Is Certified Fresh; No Reservations Is Bland; Rescue Dawn Shines
View All