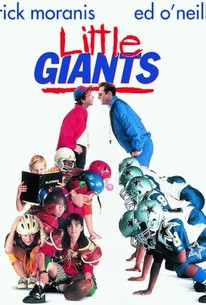 A successful retired jock and his geeky younger brother play out their sibling rivalry by coaching rival little league football teams in this family comedy. Ed O'Neill plays the older brother, Kevin O'Shea, a former Heisman Trophy winner whose gridiron exploits have made him a local hero in his small Illinois hometown. Kevin is the almost unanimous choice to head up the town's Pop Warner football team, and he happily builds an imposing team from the best local players. One of the few objectors is Kevin's young brother Danny (Rick Moranis), an awkward, bespectacled gas station owner who empathizes with the kids rejected from the team, including his own athletic daughter Becky (Shawna Waldron). As revenge, Danny starts his own competing team of misfits, taking on the coaching duties himself. Naturally, despite the total ineptitude of Danny and his players, they eventually find themselves major underdogs in a climactic battle against Kevin's well-trained juggernaut. Director Duwayne Dunham and a team of four screenwriters hit all the expected sports film conventions, throwing in a few innocent romantic subplots and cameos by real football players for good measure. ~ Judd Blaise, Rovi

John Madden (II)
as Himself

Bruce Smith
as Himself

Emmitt Smith
as Himself

Tim Brown
as Himself

Timothy Brown
as Himself
View All