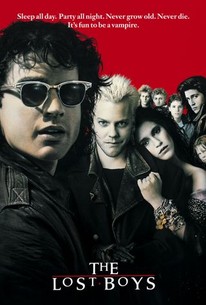 In this hit '80s hybrid of the horror movie and the teen flick, a single mom and her two sons become involved with a pack of vampires when they move into an offbeat Northern California town. Lucy (Dianne Wiest) and her sons, Michael (Jason Patric) and Sam (Corey Haim), move to Santa Carla to live with Lucy's lovable but curmudgeonly father (Barnard Hughes). Lucy gets a job from video-store owner Max (Edward Herrmann), then begins dating him, while Sam hangs out with Edward and Alan Frog (Corey Feldman and Jamison Newlander), a pair of vampire-obsessed comic-shop clerks. Soon Michael falls in with some actual vampires after becoming enamored of one of their victims: Star (Jami Gertz), a gypsy-like vixen who is trying to hold on to her humanity even though vampire leader David (Kiefer Sutherland) wants to play Peter Pan to her Wendy. When Michael visits the cavernous hangout of David and his cronies and unwittingly drinks from a wine bottle full of vampiric blood, he becomes an unwilling member of the bloodsucker biker gang. Soon, it's up to Sam and the Frog brothers to destroy David and his ilk without killing Michael and Star. Shot on location in the coastal California town of Santa Cruz and directed by Hollywood pro Joel Schumacher, The Lost Boys became a pop-culture phenomenon thanks to its attractive young stars, offbeat soundtrack, and hip, clever marketing campaign. The film's tagline -- "Sleep all day. Party all night. Never grow old. Never die. It's fun to be a vampire." -- perfectly captured its knowing mixture of attitude and gore. The effects team who transformed Sutherland and company into snarling bloodsuckers would go on to provide equally gruesome effects for Blade, another revisionist vampire flick, more than a decade later. ~ Brian J. Dillard, Rovi

News & Interviews for The Lost Boys

23 Fresh Movies and TV Shows Streaming on Netflix in April
What Was the Best Year Ever for Horror?
The Lost Boys TV Adaptation: Creator Rob Thomas Reveals His Plans for Vampire Series
View All

Critic Reviews for The Lost Boys

Audience Reviews for The Lost Boys