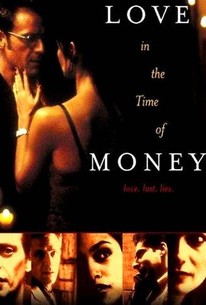 Love in the Time of Money Photos

Like La Ronde, Peter Mattei's debut film Love in the Time of Money consists of a series of conversational duets that ultimately returns to the person who started the entire chain of events. Starting with prostitute Greta (Vera Farmiga) and disgruntled trick Eddie (Domenick Lombardozzi), the story soon includes a housewife on the look for an affair (Jill Hennessy), her husband (Malcolm Gets), an artist (Steve Buscemi), a gallery worker (Rosario Dawson), and a salesman (The Sopranos' Michael Imperioli). This film was screened at the 2002 Sundance Film Festival after being developed in the Sundance labs.

Michael Imperioli
as Will

Malcolm Gets
as Robert Walker

Critic Reviews for Love in the Time of Money

I'm sure the filmmakers found this a remarkable and novel concept, but anybody who has ever seen an independent film can report that it is instead a cheap cliché.

The overall fabric is hypnotic, and Mr. Mattei fosters moments of spontaneous intimacy.

Too clever by about nine-tenths.

Despite impeccable acting ... and a script that takes some rather unexpected (even, at times, preposterous) turns, Love is just too, too precious in the end.

The problems of the people in Love in the Time of Money are hardly specific to their era. They just have problems, which are neither original nor are presented in convincing way.

Unfortunately, a cast of competent performers from movies, television and the theater are cast adrift in various New York City locations with no unifying rhythm or visual style.

Feels more like an exercise for the cast and a calling card project for Mattei than a full-blooded film.

nothing to say about life, love, or even sex

It is a great character study that ranks with Paul Thomas Anderson's epic Magnolia.

The latest vapid actor's exercise to appropriate the structure of Arthur Schnitzler's Reigen.

[I]f you've been to more than one indie flick in your life, chances are you've already seen this kind of thing.

It doesn't help that the director and cinematographer Stephen Kazmierski shoot on grungy video, giving the whole thing a dirty, tasteless feel.

Audience Reviews for Love in the Time of Money

"Love in the Time of Money" is not the first updating of "La Ronde" to the present day in New York City and it probably won't be the last, either. This particular group of linked encounters starts with Greta(Vera Farmiga) on her first night as a prostitute and hopefully her last, considering how badly her meeting with her first customer, Eddie(Domenick Lombardozzi, with hair), goes. After which, Eddie goes back to his job as a plumber and uptown where he does some work for Ellen(Jill Hennessy). Overall, "Love in the Time of Money" is inconsistent, with a couple of cheap shots at the modern art world. The best part features Steve Buscemi and Rosario Dawson which is a combination that should not click in any possible universe. But here they have a spark between them which goes down to their skill as actors. On the minus side, any segment involving Adrian Grenier is dead on arrival.

kind of pointless jumble of affairs. a little too "indie" for me

Love in the Time of Money Quotes