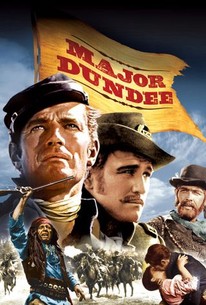 Major Dundee is a Western-type with big war scenes, shot with bombast typical of Sam Peckinpah.

Sam Peckinpah's 1965 feature Major Dundee was recut and rescored for re-release theatrically in 2005, 40 years after its original release. The "Extended Version," as it is known officially, tells essentially the same story as the original but with clearer motivations for the characters (which often seemed vague or obscure in the 1965 edition) and much greater effectiveness. Major Amos Charles Dundee (Charlton Heston) is a West Point graduate who somehow -- it's not clear -- exceeded his orders while serving in the Battle of Gettysburg and, as punishment, has been taken out of combat and put in charge of a Union prison in New Mexico. He then gets word that marauding Apaches under Sierra Charriba (Michael Pate) have raided an American settlement, slaughtering the troops who were pursuing them and kidnapping three young boys, whom they've taken to their lair south of the Rio Grande (and if this sounds a lot like the plot of John Ford's Rio Grande, it's because they used the same story as inspiration). Dundee assumes responsibility for capturing or destroying the raiders and rescuing the captives, but because he has far too few men, he's forced to recruit prisoners, including his one-time friend, Confederate Captain Benjamin Tyreen (Richard Harris), and other "gentlemen of the South," to fill out his ranks. Tyreen and his men despise Dundee, but agree to serve on this mission in exchange for the chance for possible pardon of commutation of sentence (Tyreen and some of his men are facing the rope, for killing a guard in an escape attempt). The mission takes them deep into Mexico, where they free the children but now find themselves being stalked by the very Apaches that they were hunting, as well as having to fight off the French troops stationed there. And as they quickly see, the French troops, though white and supposedly "civilized" like themselves, treat the native Mexicans in ways that make the Apaches look almost saintly. In the end, this ragtag group of soldiers, malcontents, deserters, traitors, and criminals finds a larger cause in their quest -- bigger even than their own survival -- as they discover something uniquely fine and honorable in being an American, and in American ideals. It takes the sacrifice and deaths of many to get to that point, but the movie -- in this version -- gets us there convincingly, if in decidedly grim and bittersweet fashion. Though based on fiction and shot under incredibly (indeed, legendarily) chaotic conditions, the movie ultimately proves to be a rousingly disturbing examination of what it means to be an American, and the meaning of American ideals. ~ Bruce Eder, Rovi