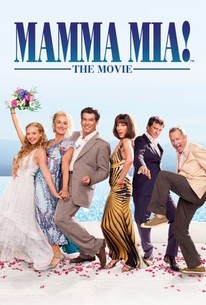 This jukebox musical is full of fluffy fun but rough singing voices and a campy tone might not make you feel like "You Can Dance" the whole 90 minutes.

Longing to discover the identity of her true father before she exchanges her wedding vows, the daughter of a once-rebellious single mother secretly invites a trio of paternal candidates to her upcoming wedding in this feature adaptation of the beloved stage musical. Independent-minded single mother Donna (Meryl Streep) has always done her best to raise her spirited daughter, Sophie (Amanda Seyfried), while simultaneously running a successful hotel on a small Greek island, but now the time has come for this hardworking mom to finally let go. In just a few days, Sophie will be married, and Donna will stand by bittersweetly as her little girl takes flight. Of course, Donna's lifelong friends Rosie (Julie Walters) and Tanya (Christine Baranski) will both be present at the wedding, but unbeknownst to the mother, Sophie has furtively invited three very special guests of her own. When Sophie walks down the aisle on that fateful day, she wants her father to hand her off. The only problem is that Donna has never revealed the true identity of Sophie's father, leaving the resourceful future bride to narrow the list down to three potential candidates. Now, as three key figures from Donna's past return to the picturesque Mediterranean shores they all walked 20 years prior, one beautiful bride will discover the secret of her past while one lonely mother finds out that it's never too late for a little romance. Phyllida Lloyd, director of both the original London sensation as well as the hit Broadway incarnation, makes her feature directorial debut with this big-screen version of the beloved musical featuring 22 classic ABBA hits. Pierce Brosnan, Colin Firth, Stellan Skarsgård, and Dominic Cooper co-star. ~ Jason Buchanan, Rovi