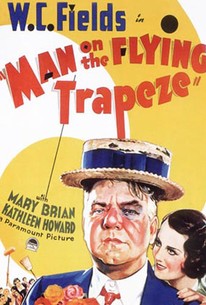 Man on the Flying Trapeze

Man on the Flying Trapeze Photos

W.C. Fields plays Ambrose Wolfinger, the henpecked husband to end all henpecked husbands. A widower, Ambrose married a second time only to provide a mother for his pretty daughter (Mary Brian). What he got was an overbearing harpy of a wife (Kathleen Howard), a fussy and imperious mother-in-law (Vera Lewis) and a shiftless brother-in-law (Grady Sutton). Ambrose plans to attend a much-awaited wrestling match, but can't get the day off of work. He lies for the first time in his life, telling his boss that his mother-in-law has died. En route to the wrestling meet, Ambrose suffers one mishap after another, from a string of traffic tickets to an encounter with a runaway tire. He gets to the match just in time to miss the whole thing, and ends up bruised and battered on the sidewalk. Meanwhile, his home is being deluged with flowers, offered in sympathy for his "dead" mother-in-law who is very much alive but not amused. When his boss discovers the deception, he fires Ambrose. The poor man returns home to face the cold stares of his wife's family. They goad and harass him until he can stand no more: when brother-in-law insults his daughter, Ambrose punches him out (a scene that always results in audience cheers) and tells everyone else where to go. Soon after, his anxious ex-boss calls up; only Ambrose can decipher the important messages left behind on his cluttered desk, and would Ambrose like to come back to work? His loyal and loving daughter negotiates a hefty salary hike for Ambrose, and the film ends with Our Hero assuming his proper role as head of the household, with his obnoxious in-laws literally left out in the rain. An uproarious "worm turns" farce, Man on the Flying Trapeze was an expanded version of 1932 Mack Sennett two-reeler, Too Many Highballs, and a partial remake of Fields' own silent feature Running Wild (27).

Tammany Young
as `Willie' the Weasel

James Flavin
as Henry, the Chauffeur

George B. French
as Clerk

Critic Reviews for Man on the Flying Trapeze

Audience Reviews for Man on the Flying Trapeze

There are no featured audience reviews for Man on the Flying Trapeze at this time.

Man on the Flying Trapeze Quotes