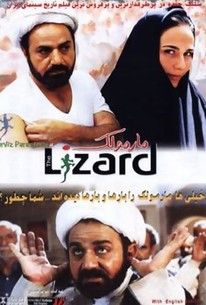 A crook gets a crash course in offering moral guidance in this Iranian comedy. Reza (Parviz Parastui) is a thief known to his underworld cronies as "The Lizard" thanks to his gift for scaling walls and climbing buildings. However, Reza's talent doesn't prevent him from being periodically caught by police; he's sent to a prison where the warden, who regards Reza as morally corrupt, takes it upon himself to torture him into a more spiritually pure state. Reza soon strikes up a friendship with a mullah (an Islamic priest) who offers a more benevolent and humanistic spiritual viewpoint. But, while Reza admires the mullah, that doesn't stop him from taking the holy man's clothes as a disguise for an escape attempt. Reza's plan works, but circumstances dictate that he must continue to pose as a mullah when the over-enthusiastic congregation at a mosque mistake him for their new leader, and he finds himself forced to offer spiritual advice based on his gut feelings rather than any extensive Islamic teachings. A major box-office success in Iran that broke box-office records, Marmoulak (aka The Lizard) also won the audience award at Tehran's Fajr Film Festival. Though popular, the film was increasingly controversial in its home country and was banned in some areas; pressure from clerics, the judiciary, and the Culture Ministry eventually led the filmmakers to withdraw it from theaters in May of 2004 (it had premiered in April and was expected to run until at least July).

There are no featured audience reviews for Marmoolak at this time.