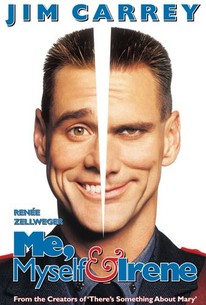 While Jim Carrey's comedic skills earn some laughs, Me, Myself and Irene sports a tired, unsatisfying plot.

Me, Myself & Irene Ratings & Reviews Explanation

Me, Myself & Irene Photos

Six years after Dumb and Dumber, Jim Carrey reunited with Peter Farrelly and Bobby Farrelly for this anarchic comedy with a hint of romance. Charlie (Carrey) is a good-natured Rhode Island state trooper who likes helping people. But years of internalizing his frustrations about his work and his family have caused Charlie to develop an alter ego: Hank, an abusive, violent, sexually compulsive police officer. Charlie can keep Hank at bay with medication, but just barely. When Irene (Renee Zellweger) finds herself in legal trouble through a series of misunderstandings involving her ex-boyfriend, Charlie must escort her on a long drive to New York for questioning. After Charlie loses his medication, he and Hank wind up vying for her affections: Charlie wants Irene to marry him, while Hank has more brutal intentions. Me, Myself, and Irene also features Chris Cooper, Robert Forster, and Jessica Harper, as well as Anthony Anderson, Mongo Brownlee, and Jerod Mixon as Charlie's rotund, African-American sons. ~ Mark Deming, Rovi

News & Interviews for Me, Myself & Irene

Critic Reviews for Me, Myself & Irene

Audience Reviews for Me, Myself & Irene

Me, Myself & Irene Quotes