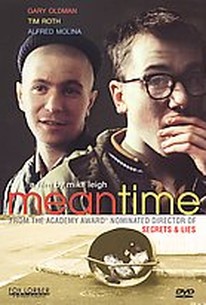 Colin (Tim Roth, making his screen debut) and his brother Mark (Phil Daniels, who starred in Quadrophenia) are down and out. They live in a squalid flat with their unemployed father, Frank (Jeff Robert), and their put-upon mother, Mavis (Pam Ferris). They're on the dole, and Mark is constantly scrounging for cash and cadging drinks from his friends, among them Coxy (Gary Oldman in his screen debut), a skinhead. Colin, shy and perhaps mentally disabled, has a crush on a good-natured local girl, Hayley (Tilly Vosburgh). But when Coxy brings him over to her apartment, he can only watch helplessly as a rather ugly scene unfolds. Mark, who is constantly mocking Frank's hypocritical and outdated world view, also makes fun of Colin and calls him "Kermit" and "muppet." Barbara (Marion Bailey, who would later appear in All or Nothing), the boys' middle-class aunt, drops by one day and offers Colin work helping her redecorate her house. Colin seems only mildly interested, but his parents pressure him to take the offer. Mark says that Barbara is exploiting Colin, but his family suspects that Mark is just resentful because Barbara didn't offer him the job. On Colin's first day, Mark turns up at Barbara's to learn that Colin hasn't shown up yet. As Mark and Barbara search the neighborhood for Colin, Mark makes insinuations about the state of Barbara's troubled relationship with her husband, John (Alfred Molina). Meantime, conceived and directed by Mike Leigh, was produced for British television, and shown at the 1984 Berlin International Film Festival. ~ Josh Ralske, Rovi

Herbert Norville
as Man in Pub