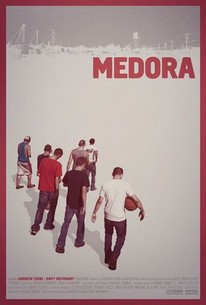 Years ago, Medora was a booming rural community with prosperous farms, an automotive parts factory, a brick plant, and a thriving middle class. The factories have since closed, crippling Medora's economy and its pride. The population has slowly dwindled to around 500 people. Drug use is common, the school faces consolidation, and as one resident put it, "This town's on the ropes." Medora follows the down-but-not-out Medora Hornets varsity basketball team over the course of the 2011 season, capturing the players' stories both on and off the court. The Hornets were riding a brutal losing streak when we arrived, and the team's struggle to compete bears eerie resonances with the town's fight for survival. Medora is an in-depth, deeply personal look at small-town life, a thrilling, underdog basketball story, and an inspiring tale of a community refusing to give up hope despite the brutal odds stacked against them. On a grander scale, it's a film about America, and the thousands of small towns across the country facing the same fight. As one towns-person told us, "Once we lose these small towns, we can't get them back." (c) Official Site

There are no featured audience reviews for Medora at this time.