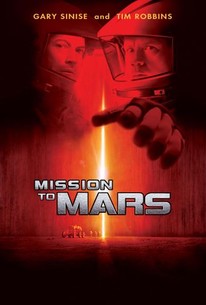 Beauty only goes skin deep in this shallow but visually stunning film.

Brian De Palma directed this science-fiction suspense story. When the United States sends its first manned mission to Mars, hopes are high for new scientific discoveries, but many of those hopes are dashed when the Mars crew meets an unexplained disaster; three members of the mission are killed, and a fourth (Don Cheadle) loses all radio contact with the Earth. A rescue mission sets out to bring back the one survivor; in the process, they discover that Mars may not be a dead planet after all, and uncover some startling evidence about the fate of their predecessors. The rescue crew includes Gary Sinise, Jerry O'Connell, Connie Nielsen and Tim Robbins. The screenplay was partially by award-winning playwright Ted Tally, who won an Oscar for his adapted screenplay of The Silence of the Lambs.

Chaynade Knowles
as Child at Party

Jeff Ballard
as Child at Party

Anson Woods
as Child at Party

Britt McKillip
as Child at Party

Jillian Hubert
as Child at Party

Jody Thompson
as Pretty Girl No. 1

Lucia Walters
as Pretty Girl No. 2

Pamela Diaz
as Pretty Girl No. 3

Jukka Joensuu
as Priest
View All

Critic Reviews for Mission to Mars

Audience Reviews for Mission to Mars