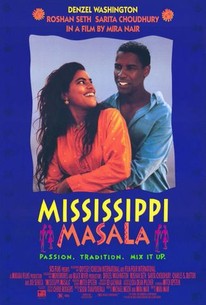 Mississippi Masala is a tale of how prejudice makes victims and instigators of us all. In 1972, Indian Jay (Roshan Seth), a resident of Uganda, is forced by the bigoted Amin regime to take his family and flee the country. He vows to hate and distrust all blacks--at least until he is able to reclaim the real estate stolen from him by the Ugandan government. Flash-forward to 1990: Jay and his family have settled in Mississippi. Seth's daughter Mina (Sarit Choudhury) makes the acquaintance of African-American Demetrius (Denzel Washington), the prosperous manager of a carpet-cleaning business. At first attracted to Mina because he is fascinated by her African background, Demetrius slowly falls in love with her. The situation causes Jay to exercise the same racial prejudice by which he was himself victimized. Ironically, Demetrius behaves just as foolishly, blaming Jay's ethnic chauvinism for a drop in his business. Both Jay and Demetrius must learn to bury their pasts and their prejudices to go on with their lives.

Joyce Murrah
as Lady at Lusco's

Michael Wawuyo
as Soldier on Bus

Muteta Wilberforce
as Soldier at Roadblock
View All