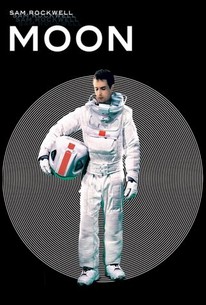 Boosted by Sam Rockwell's intense performance, Moon is a compelling work of science-fiction, and a promising debut from director Duncan Jones.

An astronaut miner extracting the precious moon gas that promises to reverse the Earth's energy crisis nears the end of his three-year contract, and makes an ominous discovery in this psychological sci-fi film starring Sam Rockwell and Kevin Spacey. For three long years, Sam Bell has dutifully harvested Helium 3 for Lunar, a company that claims it holds the key to solving humankind's energy crisis. As Sam's contract comes to an end, the lonely astronaut looks forward to returning to his wife and daughter down on Earth, where he will retire early and attempt to make up for lost time. His work on the Selene moon base has been enlightening -- the solitude helping him to reflect on the past and overcome some serious anger issues -- but the isolation is starting to make Sam uneasy. With only two weeks to go before he begins his journey back to Earth, Sam starts feeling strange: he's having inexplicable visions, and hearing impossible sounds. Then, when a routine extraction goes horribly awry, it becomes apparent that Lunar hasn't been entirely straightforward with Sam about their plans for replacing him. The new recruit seems strangely familiar, and before Sam returns to Earth, he will grapple with the realization that the life he has created may not be entirely his own. Up there, hundreds of thousands of miles from home, it appears that Sam's contract isn't the only thing about to expire. ~ Jason Buchanan, Rovi

Malcolm Stewart
as The Technician
View All