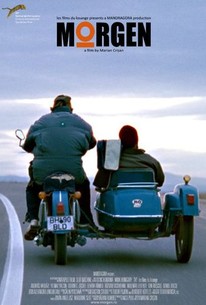 Two men strike up a friendship despite the fact they aren't sure what either is actually saying in this comedy/drama from writer and director Marian Crisan. Nelu (Andras Hathazi) is a middle-aged guy who works in a supermarket in a Romanian town not far from the border with Hungary. Nelu doesn't ask much of life besides a few beers with his friends and an occasional fishing trip on his days off, and he's treating himself to the latter at a spot just over the Hungarian line when he sees a man who looks to be lost and hiding. While the stranger speaks only Turkish and Nelu only speaks Romanian, in time he figures out that the man's name is Behran (Yilmaz Yalcin) and that he's slipped into Hungary illegally while trying to make his way to Germany to visit his son. Sympathetic to Behran's troubles, he smuggles him into Romania and lets him stay in his basement, telling his suspicious wife that Behran is a gypsy handyman doing some repairs. However, while Nelu wants to help his new friend get at least a border or two closer to his family, making that happen turns out to be more complicated than either man expects, with the language barrier not helping a bit. Morgen is named for the one word in German both men know, meaning "tomorrow;" the film won the Special Jury Prize at the 2010 Locarno Film Festival.

There are no featured audience reviews for Morgen at this time.