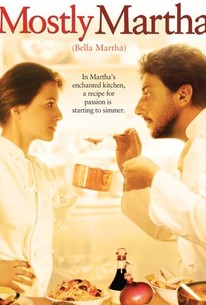 Mostly Martha may have a predictable plot, but it still feels charming and fresh, and the food will make you hungry.

Martha is the chef at a small gourmet restaurant in Hamburg who creates mini-masterpieces in every dish. She devotes every waking hour to her work and her shyness keeps her from breaking out of her monotonous routine or meeting new people. When her sister dies in an accident, however, she is compelled to adopt Lina, her 8-year-old niece. Martha's life changes in an instant: not only is she faced with adjusting to her new parental role, but she must also find inspired ways to deal with Lina's grief over the loss of her mother. Surprisingly, help comes from Mario, Martha's new Italian sous-chef, who begins to visit Martha and Lina, doing all that he can to cheer them up with jokes and elaborate meals. Just as the trio returns to a stage of normalcy in their lives, Lina's long missing father arrives, announcing that he wants to take Lina back to Italy with him. Having grown to love Lina and her own role as the girl's protector, Martha is faced with a difficult dilemma.

Maria Fuchs
as Friend
View All