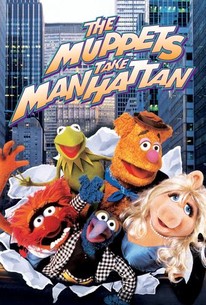 If it's not quite as sharp as The Muppet Movie, The Muppets Take Manhattan is still a smart, delightfully old-fashioned tale that follows the formula established by the first two movies -- a madcap adventure assisted by a huge group of human stars.

Jim Henson's Muppets find themselves in Manhattan yearning to get a musical on Broadway in this charming film that also chides show business and its foibles. Kermit the Frog has just put together a successful variety show at Danhurst college (probably somewhere between Amherst and Dartmouth), and although he would like to mount it on Broadway so he would have a hit and be able to marry Miss Piggy, he cannot find backers. The Muppets are then forced to take jobs to support themselves, and it is while working as a waiter that Kermit meets the friendly Jennie (Juliana Donald). Jennie is the daughter of the owner of the restaurant and a source of great jealousy for Miss Piggy, who does not like competition. With stunning musical numbers involving a hundred or so Muppets and on-scene locations in New York City, the film is impressive in its merging of technical achievements and acting. ~ Eleanor Mannikka, Rovi

Steve Whitmire
as Rizzo the Rat/Gil

Dabney Coleman
as Himself

Linda Lavin
as Herself

Liza Minnelli
as Herself

Brooke Shields
as Herself

Ed Koch
as Himself

James Coco
as Himself

Art Carney
as Himself

Elliott Gould
as Himself

Gregory Hines
as Himself

Kathryn Mullen
as Jill the Frog

Don Quigley
as Man in Bleachers

Wade Barnes
as Customer at Sardi's

Milton Seaman
as Customer at Sardi's

100 Fresh Movies You Can Watch for Free Online Right Now
Best Muppets Ever — Rank Them!
10 New and Returning Animated Series To Watch This Spring
View All