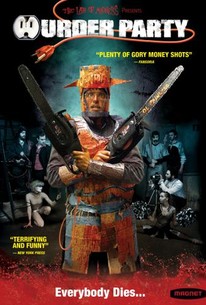 A loser finds out the hard way there are worse things than spending another night at home in this horror comedy from first-time director Jeremy Saulnier. Christopher (Chris Sharp) is a nebbish who can't get any respect at work, couldn't get a date if his life depended on it, and has practically no social life. Christopher figures he's going to be stuck at home on Halloween until he finds an invitation for a "murder party" on the sidewalk; expecting a costume party with fun and games, he slaps together a cardboard "suit of armor" and shows up for the festivities. The bash is being thrown by a group of bohemian artists who are rather surprised Christopher has shown up -- he's the only stranger to take the bait and arrive for their party, in which their guest-of-honor is actually going to be killed in the name of creativity (and impressing a jaded patron who finances their projects). Before long, Christopher begins to realize what's going on, and struggles to find a way out of the warehouse where the party is being held, while the artists begin to turn on one another and the blood starts to flow. Murder Party won the Audience Award for Best Narrative Feature at the 2007 Slamdance Film Festival.

Sandy Barnett
as Alexander (aka The Mastermind)

Macon Blair
as Macon (aka The Wolfmelt), Macon

Bill Lacey
as Bill (aka The Ghoulyville Slugger)

Skei Saulnier
as Sky, Sky (aka The Jeerleader)

David Zellerford
as Lover Not Fighter