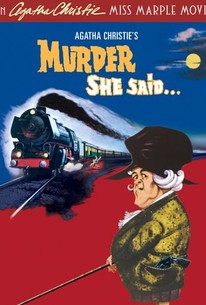 Dumpy, dough-faced British comedienne Margaret Rutherford was not precisely the physical type Agatha Christie had in mind for the prim, tweedish sleuth Miss Marple. Still, Rutherford's first "Marple" movie Murder, She Said did so well at the box office that there was no question she would continue appearing in the role in the inevitable sequels. In this initial effort, Marple witnesses a murder being committed on a speeding train. She informs the authorities, but they find no evidence of a killing and write off Marple as a doddering eccentric. Determined to prove that she's not imagining things, Marple investigates the area around the stretch of railroad track where the murder occurred. She winds up on the estate of James Robertson-Justice, disguised as a maid. Many family skeletons are exhumed by Miss Marple before she proves that she indeed saw a murder and pinpoints the guilty party. Stringer Davis, Margaret Rutherford's husband, makes his first appearance as Miss Marple's chaste companion Mr. Stringer. Based on Agatha Christie's 4:50 From Paddington, Murder, She Said was released in some markets as Meet Miss Marple. ~ Hal Erickson, Rovi

Critic Reviews for Murder She Said

Audience Reviews for Murder She Said