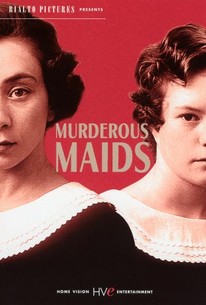 A historical account that is equally disturbing and engrossing, with a powerful performance by Sylvie Testud.

Based on the same infamous murders that inspired Jean Genet's play +The Maids, and the earlier film Sister My Sister, this French drama explores the difficult family life, professional pressures, and forbidden bond that in 1933 led sisters Christine and Lea Papin to murder the mother and daughter who employed them as maids. Based on Paulette Houdyer's novel L'affaire Papin, Les Blessures Assassines traces the childhood of Christine Papin (Sylvie Testud), a high-strung child who follows older sister Emilia to a convent school after their parents' bitter divorce. Emilia, who claims to have been molested by their father, eventually becomes a nun, while Christine goes into service to support her libertine mother (Isabelle Renauld), whom she heartily resents. Coddled youngest sister Lea (Julie-Marie Parmentier), who is allowed to grow up at home, feels torn between her love for her mother and her close bond with Christine. A talented but moody servant who is prompt to demand her rights under France's labor laws, Christine moves from position to position, but eventually finds a series of households where she and the now teenaged Lea can serve together. Living and working together, the sisters develop an uncanny affection that crosses over into lesbian incest. Eventually jealousy, class resentment, and family drama drive Christine over the edge -- and she is not above taking the mostly innocent Lea with her. Released the same year as the Papin documentary En Quete Des Soeurs Papin, Les Blessures Assassines marked the first film in more than a decade from writer/director Jean-Pierre Denis.