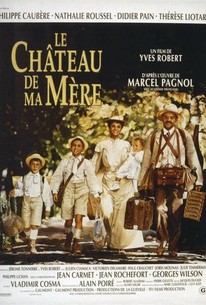 This charming motion picture relives the beautiful childhood memories of noted film director and writer Marcel Pagnol. While attending school in Marseilles, Marcel Julien Ciamaca daydreams about the nearby hills where he and his family spend vacations at a cottage. It is not enough to sojourn there over Christmas, Easter, and summer holidays; Marcel wants to be there all the time, to roam the fields, climb the rock faces, and enjoy other simple pleasures with his mother, father, and siblings. And then something marvelous happens. His mother Augustine (Nathalie Roussel) persuades his father Joseph (Philippe Caubere), a schoolteacher, to allow the family to spend each weekend at the cottage. Because they have no car, they must ride public transport part of the way, then walk the remaining five miles. However, a former pupil of Joseph's shows them a shortcut that crosses private estates and reduces the distance to only one mile. So the family enjoys weekend after wonderful weekend in the hills. Marcel plays with a country boy, picks thyme for the family's alfresco dinners, and meets a girl whom he rescues from spiders. Though she is an imperious little lass, Marcel is quite taken with her and even performs feats of derring-do to impress her. These carefree weekend outings continue until one day a heartless watchman charges the Pagnols with trespassing on an estate on their way to the cottage. Woe is Joseph. He believes his very proper school will fire him. But when the school officials call him in, they promote him! They know nothing of his trespassing, for Joseph's former pupil has tricked the watchman into dropping the charge. Then more good news comes; Marcel has won an academic prize. The film has a bittersweet ending in which Marcel, as an adult, reviews what has happened to the family members since those wonderful days when life was good and all was right with the world.

Michel Modo
as The Postman

Victor Garrivier
as The Parish Priest

Jean Rougerie
as The Secondhand Dealer