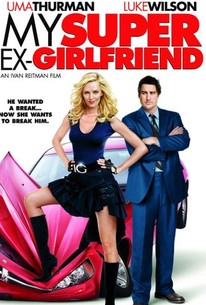 My Super Ex=Girlfriend is an only sporadically amusing spoof on the superhero genre that misses the mark with a nerd-turned-superwoman who embodies sexist clichés.

A regular guy finds out just how hard breaking up can truly be when attempting to call it quits with a clingy female crime fighter who doesn't want to let love die in director Ivan Reitman's super-powered romantic comedy. Matt Saunders (Luke Wilson) was looking for love when he first met pretty brunette Jenny Johnson (Uma Thurman), and at the time it seemed as if he may had finally actually found it. Jenny isn't just your typical girl, though, because despite her outwardly normal appearance she is actually a powerful superhero dedicated to ridding the streets of crime. Her outward strength betrays a deep-rooted insecurity, too, and when Jenny begins to become a bit too possessive for Matt's laid-back taste, the troubled boyfriend does his best to end the relationship amicably. They say that breaking up isn't easy to do, however, and when your girlfriend is a superhero, that sentiment holds twice the truth as it does under any normal circumstances. Matt is determined to get on with his life, though, and as his budding romance with beautiful co-worker Hannah (Anna Faris) begins to get serious, jealous Jenny scornfully slips into G-Girl mode to prove that hell hath no fury like a woman superhero scorned.

Ron Moreno
as Thief No. 2

Peter Patrikios
as Thief No. 3

Santos
as Thief No. 4

Lilian Lynn
as Pedestrian at Robbery

Lillian Lynn
as Pedestrian at Robbery

Richie Rich
as Himself

Ryan Maloney
as Man on Street

News & Interviews for My Super Ex-Girlfriend

Critic Reviews for My Super Ex-Girlfriend

Audience Reviews for My Super Ex-Girlfriend