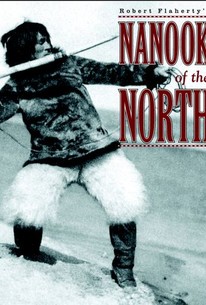 Nanook of the North

An enthralling documentary and a visual feat, Nanook of the North fascinates with its dramatic depiction of life in an extremely hostile environment.

Nanook of the North is regarded as the first significant nonfiction feature, made in the days before the term "documentary" had even been coined. Filmmaker Robert Flaherty had lived among the Eskimos in Canada for many years as a prospector and explorer, and he had shot some footage of them on an informal basis before he decided to make a more formal record of their daily lives. Financing was provided by Revillion Freres, a French fur company with an outpost on the shores of Hudson Bay. Filming took place between August 1920, and August 1921, mostly on the Ungava Peninsula of Hudson Bay. Flaherty employed two recently developed Akeley gyroscope cameras which required minimum lubrication; this allowed him to tilt and pan for certain shots even in cold weather. He also set up equipment to develop and print his footage on location and show it in a makeshift theater to his subjects. Rather than simply record events as they happened, Flaherty staged scenes -- fishing, hunting, building an igloo -- to carry along his narrative. The film's tremendous success confirmed Flaherty's status as a first-rate storyteller and keen observer of man's fragile relationship with the harshest environmental conditions. (In a sadly appropriate footnote, Nanook, the subject of the film, died of starvation not long after the film's release.)

Berry Kroeger
as spoken by

Critic Reviews for Nanook of the North

Audience Reviews for Nanook of the North

Nanook of the North Quotes