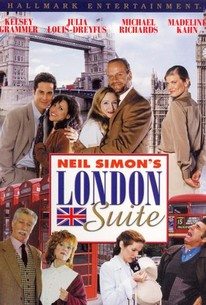 Crafted in the mold of his classic play-cum-films Plaza Suite and California Suite, the legendary Neil Simon authors London Suite, a made-for-television movie that took its first bows in September 1996. As in the prior films, Simon presents a series of couplets that unfold in and around a single hotel, this one in the city of Big Ben and Westminster. Of the four sketches, the first stars Julie Hagerty (Lost in America) and Michael Richards (Seinfeld) as husband-and-wife Mark and Anne Ferris, who journey to Wimbledon for the matches, only to suffer gravely when they lose their tickets and Mark injures his back; matters go from difficult to unbearable when Mark takes a trip through comic hell at the hands of a sadistic chiropractor. Episode two features Seinfeld's Julia Louis-Dreyfus and Weekend at Bernie's star Jonathan Silverman as Debra and Paul Dolby, honeymooners who lose track of their suitcases and then each other. In episode three, Frasier's Kelsey Grammer and Far From Heaven's Patricia Clarkson portray divorcees Sidney and Diana Nichols, who meet up in London town, where Diana hopes to promote her new television program and Sidney schemes to wheedle money out of his ex, to pass it along to his gay lover, Max. In the final segment, the late Madeline Kahn (Blazing Saddles) plays Sharon Semple, an American on a London shopping spree with her daughter, who meets and falls in love with Dennis Cummings, "The Snorting Scotsman," (Empty Nest's Richard Mulligan), only to contend with his penchant for Ferraris and his obnoxious laugh. London Suite is helmed by Jay Sandrich, veteran director of The Mary Tyler Moore Show, The Bob Newhart Show, and Laverne and Shirley.

There are no critic reviews yet for Neil Simon's 'London Suite'. Keep checking Rotten Tomatoes for updates!

There are no featured audience reviews for Neil Simon's 'London Suite' at this time.