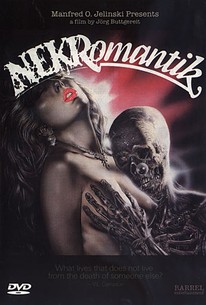 With Nekromantik, first-time feature director Jorg Buttgereit mixes cheap gore, transgressive imagery, and cosmic dread into a cult-classic examination of sex, death, and boredom among the youth of pre-reunification Germany. Passive, blank-faced Rob (Daktari Lorenz) spends his days collecting human roadkill from the side of the Autobahn and his nights enacting a quietly macabre domesticity with girlfriend Betty (Beatrice Manowski, credited here as Beatrice M.) in their autopsy/industrial/Nazi-themed apartment. One day Rob delights Betty by bringing home a decomposed corpse dredged from a swampy roadside lagoon; with a sawed-off bedpost in place of its rotted genitalia, the body serves alternately as a vile wall decoration and the third member of a grotesque and quite graphic ménage à trois. When Rob loses his job, material girl Betty hoofs it, and her divorce settlement includes the couple's favorite sex aid. An alienated Rob soon turns to horror movies, animal torture, prostitutes, and graveyard sex in his quest to find the unique combination of utter degradation and total acceptance he shared with his one true necrophile love. Meanwhile, the haunting image of a rabbit being skinned plays like a cartoon in the young man's imagination, perhaps a childhood memory, perhaps an existential dream. Ultimately, this slaughterhouse motif leads Rob to enact a painfully final solution to his deadly eroticism; his journey would nevertheless continue in Buttgereit's Nekromantik 2 a few years later. Although it received its German premiere in 1988, work on Nekromantik started in late 1986, when Buttgereit, the veteran of several shorts, began fashioning the corpse that would figure so heavily in the story; the director knew that without a realistic-looking prop, the project wouldn't be worth filming in the first place. As Nekromantik's cult following grew slowly in Germany, then abroad, rumors abounded that the filmmakers had used actual dead bodies during the shoot. In fact, the film's main corpse was largely synthetic, although real pig eyes from a slaughterhouse filled its sockets -- and, in some scenes, the characters' mouths. Manowski would go on to appear in Wim Wenders' Wings of Desire, while composer/co-star Lorenz would largely give up acting in favor of his musical activities, which included several more collaborations with Buttgereit. ~ Brian J. Dillard, Rovi