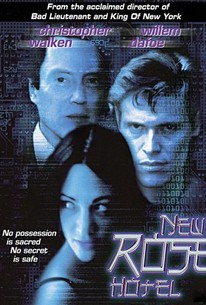 Abel Ferrara directed this erotic thriller adapted by Ferrara and Christ Zois from a short story by science fiction author William Gibson (in his Burning Chrome collection). Global corporations rule the world, and corporate raider Fox (Christopher Walken) and his deputy X (Willem Dafoe) could pocket $100 million if they can get top scientist Hiroshi (Yoshitaka Amano) to defect from one corporation to another. Fox offers singer Sandii (Asia Argento) $1 million to seduce Hiroshi away from his wife, family, and employer. An affair develops between Sandii and X, while she studies facts about Hiroshi's life. She departs on her assignment, but betrayals ensue, with Fox and X soon becoming targets themselves. With opening credits in three languages (English, German, Japanese), the soundtrack features the score-composition debut of hip-hopper Schoolly D, music which plays over a blank screen at the wrap-up (since the film has no closing credits). This Gibson short story was a property once in development by director Kathryn Bigelow. The title story of Gibson's Burning Chrome collection was planned as the second Heavy Metal movie, intended for live-action and scripted but never filmed. Shown in competition at the 1998 Venice Film Festival.