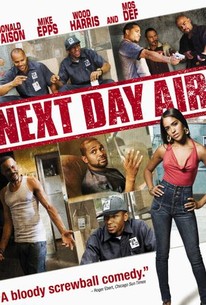 Rife with half-baked jokes and excessive violence, Next Day Air is an uninspired stoner comedy.

An overnight shipment of drugs winds up being sent to the wrong recipient, prompting a frantic race to recover the package before the contents are discovered in this fast-paced crime comedy starring Donald Faison, Mos Def, and Mike Epps. When Brody (Epps) and Guch (Wood Harris) received package containing 10 kilos of grade-A cocaine, they assumed their financial woes were a thing of the past. The package was intended for their Brody and Guch's next-door neighbors, but the whacked-out courier (Donald Faison) delivered it to the wrong address. Recognizing the possibility for profit, the scheming duo plans to sell the cocaine to Brody's drug-dealing cousin (Omari Hardwick). Meanwhile Jesus (Cisco Reyes) and his girlfriend Chita (Yasmin Deliz), the intended recipients of the cocaine, set out to procure the package before notorious drug lord Bodego Diablo (Emilio Rivera) realizes it's gone missing. But Bodega is no slouch; he already knows the shipment was botched, and he's determined to get his drugs back no matter what the cost. Later, as Brody and Guch prepare to seal the deal that will set them up for life, the guns are drawn and the chaos begins.

News & Interviews for Next Day Air

Critic Reviews for Next Day Air

Audience Reviews for Next Day Air