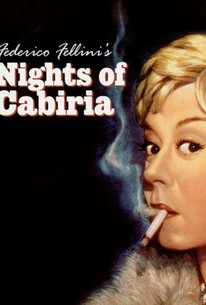 Giulietta Masina is remarkable as a chronically unfortunate wretch with an indomitable spirit in Federico Fellini's unrelentingly bleak -- yet ultimately uplifting -- odyssey through heartbreak.

Nights of Cabiria opens with Cabiria (Giulietta Masina) and her boyfriend playfully embracing by the seaside -- and then he shoves her into the water and steals her purse. Cabiria is revived by some local boys and runs off by herself, shouting. What follows is a series of similarly humiliating episodes, in which the defiantly positive prostitute Cabiria is hurt, but never broken. She gets picked up by movie star Alberto Lazzati (Amedeo Nazzari, doing a self-parody) and taken to his palatial estate. However, his mistress shows up and Cabiria gets locked in the bathroom all night with the dog. She then joins her fellow prostitutes for a blessing from the Virgin Mary, and ends up getting drunk and wandering into a local show, where the hypnotist invites her to join him on-stage. The audience heckles her, and she toughly reminds them of her independence and that she owns her own house. There she meets Oscar (François Perier), an accountant who romantically pursues her. Despite the warnings of her fellow prostitute friend, Wanda (Franca Marzi), she prepares to sell all her belongings and accept Oscar's proposal of marriage. After being ruthlessly taken advantage of once again, Cabiria walks off alone with a smirk of hope.

Jérôme Polidor
as The Monk

Mimmo Poli
as Man Eating in the Nightclub

Giovanna Gattinoni
as Aunt
View All