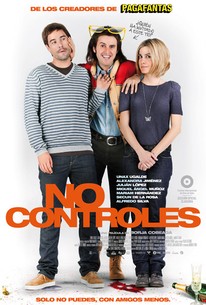 An obnoxious comedian attempts to help a lovelorn stranger win back his ex-girlfriend by throwing the ultimate New Year's Eve party after they all get stranded in a hotel on the biggest night of the year. Heartbroken journalist Sergio (Unax Ugalde) has just suffered through a nasty break-up with his girlfriend Bea (Alexandra Jimenez) when he boards a plane to return to Spain, and happens across his old classmate Juancarlitros (Julian Lopez), a stand-up comic who never stops talking. Meanwhile, Bea catches a flight to Germany, and her handsome new boyfriend Ernesto (Miguel Angel Munoz). Just as everyone settles in for their flight, the airlines announce that all planes have been grounded due to bad weather, and that the passengers will be spending the night in a local hotel. Once there, Juancarlitros hatches a plan to get Sergio and Bea back together by throwing an impromptu New Year's Eve bash. With a little help from taciturn hotel employee Jimmy (Alfredo Silva), plucky flight attendant Laura (Mariam Hernandez), and excitable divorcee Juanan (Secun de la Rosa), the festivities quickly get underway. Just when it starts to look like Sergio may actually have a shot at charming Bea back into his arms, however, Ernesto shows up unannounced, and threatens to turn Juancarlitros' perfect plan into an epic disaster.

Alfredo Silva
as Jimmy
View All

Critic Reviews for No controles

There are no critic reviews yet for No controles. Keep checking Rotten Tomatoes for updates!

Audience Reviews for No controles

There are no featured audience reviews for No controles at this time.