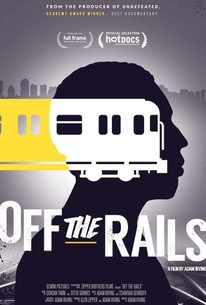 Off the Rails sparks interest with its bizarre story, but its impact lingers thanks to its empathetic treatment of its subject -- and clear advocacy for a marginalized sector of society.

Off the Rails Ratings & Reviews Explanation

Off the Rails Photos

OFF THE RAILS tells the remarkable true story of Darius McCollum, a man with Asperger's syndrome whose overwhelming love of transit has landed him in jail 32 times for impersonating New York City bus drivers and subway conductors and driving their routes. As a boy in Queens, NY, Darius found sanctuary from school bullies in the subway. There he befriended transit workers who taught him to drive trains. By age 8, he memorized the entire subway system. At 15, he drove a packed train 8 stops by himself, making all the stops and announcements. Over the next three decades, Darius commandeered hundreds of trains and buses, staying en route and on schedule, without ever getting paid. He attended transit worker union meetings, lobbying for better pay and working conditions for a union he didn't belong to. Although Darius has never damaged any property or hurt anyone in his decades of service, he has spent 23 years in maximum security prison. Darius' recidivism embodies the criminal justice system's failure to channel the passions of a harmless, mentally challenged man into a productive career and purposeful life.

News & Interviews for Off the Rails

Critic Reviews for Off the Rails

Audience Reviews for Off the Rails

There are no featured audience reviews for Off the Rails at this time.

Off the Rails Quotes