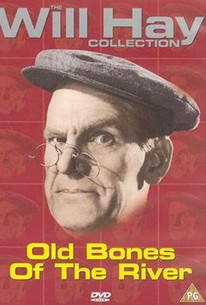 Old Bones of the River

An "answer" to Paul Robeson's Sanders of the River, Old Bones of the River stars comedian Will Hay as Professor Tibbetts, a member of TWIRP ("Teaching and Welfare Institute for the Reform of Pagans"). Not especially suited to his job of bringing English education to native tribes in Africa -- as he arrives, he is still trying to learn the native language through phonograph record lessons -- Tibbetts quickly falls victim to a trick by a duplicitous native prince, involving sneaking a gin still into the country. Tibbetts makes his way to Kombooli High, where his students wear Eton collars with little else. (Tibbetts makes do with a mortarboard and safari shorts.) Things are proceeding reasonably well when the Commissioner takes ill with malaria, and Tibbetts is forced to take over his responsibilities. He travels upriver to begin his tax collecting chores (goats or rubber being perfectly acceptable in lieu of actual money), meeting two old cronies of his in the process and rescuing a baby from an untimely death by sacrifice. Unfortunately, Tibbetts and his pals make rather a mess of things and manage to roil up tensions that result in a native uprising, but things eventually come out alright in the end.

Will Hay
as Prof. Benjamin Tibbetts

The Western Brothers
as Narrator

Robert Adams
as Bosambo
View All

Critic Reviews for Old Bones of the River

Audience Reviews for Old Bones of the River

There are no featured audience reviews for Old Bones of the River at this time.

Old Bones of the River Quotes